Yesterday I found myself teetering atop a metal patio chair, a seven-pound sawzall in my hand and maybe 200 yards of daisy-chained extension chord trailing behind me. I had decided to trim the wooden fence between our yard and our neighbor’s (for those of you wondering, I wisely chose not to use my axe). It was a project that had long been on my mind. Our fence on the western side, though quite attractive, is about ten-feet high. Our neighbor’s is only about man-height. I believed that if we lost the extra four-ish feet, we’d get a little more of the crazy New Mexican late day light, as well as a more expansive sunset and maybe another hundred vertical feet of the Jemez Mountains in view.

Weeks earlier, I went over the plan with the neighbor. Let’s call him Hans. In addition to being a former Alaskan wildfire fighter, on his side of the fence in question, he grows chard and grey-water irrigated fruit trees, keeps goats, a turkey and enough chickens to provide us and several other neighbors with eggs. We’ve become friends. He gives me native medicinals, tree bark that he suggests I boil into a tea, and the like. He smiles at most of my projects and plans with a sort of patronizing consent, stemming perhaps from a parenting philosophy that urges allowing your children to make their own mistakes. He often has a look in his eye as I talk of this or that, which though quite kind, also seems to say something like: “I never knew a man could reach an age where grey grows in his beard with such a small skill set or general sense of how the world works…but sure go for it.” In general, that’s all the encouragement I need.

Although Hans and my wife were well aware of my rough idea, the decision to cut the fence yesterday afternoon was mine and mine alone. It came on quite suddenly. Having made a breakthrough on the penultimate song for my book/record project, and having nothing to do for the next hour or so, the classic “why not cut down your fence” thought that comes calling to most men of my general disposition with spring right around the corner, came calling quite loudly to me. 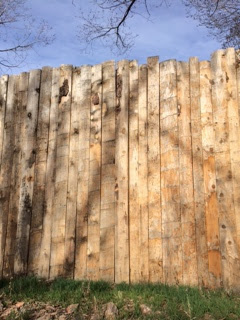 here were a lot of things that could have gone wrong. And each potential problem kept flickering through my head like a blooper reel as I was up on my chair wailing away with that saw–my arms vibrating wildly, muscles beginning to lose the ability to keep the saw up; my hands blistering at an almost visible rate; sawdust in my hair, my eyes, my mouth, all over my neck and back, finding its way even inside the waist of my jeans and into my socks; the string of extension chords catching on the cactus in the backyard, maybe sparking a little; my uneven chair wobbling; the blade of my saw bent into a banana shape from a knot in one early beam and so cutting at a very peculiar angle; and the whole saw–even the plastic handle of the weapon–hotter than a cage of hatch chiles over a blowtorch. Still I forged ahead. Time was limited after all (the wife would return any minute), and I could deal with all those problems. There was a fence to be cut, damn it.

Now this fence had not been level to begin with. Each piece of wood was intentionally cut unevenly or sunk unevenly into the ground, giving the whole expanse a natural look (see above pic) that I was working hard to match by making some pieces taller and some shorter, some straight and some angled. Also, I only wanted to lower the height of the southern half of the fence. For privacy sake, I wanted to preserve the existing height of the stretch between our houses. I had decided that a gradual (and thus invisible) slope would be better than cutting off four feet from half the fence and the none from the rest. So the goal was to do uneven cuts and to slowly and steadily reduce the slope of the overall reduction until I got back to the original fence height near our houses.

Turns out it was a prospect for a master builder not a procrastinating musician. If you weren’t already aware, intentionally cutting wood to look “naturally uneven” is far harder than an average city dweller might assume. Also, the notion that a gradual slope would be undetectable on any length shorter than say a quarter mile is highly unlikely. I realized pretty quickly that my plan was not a good one. Yet driven by the classically male belief that if I just finish the whole thing it’ll work out in the end, I pushed ahead.

About mid way through the cutting, Hans popped his head up over the fence (luckily I wasn’t cutting nearby at the time).
“Looks good,” Hans said in a tone that I had to assume was sarcastic.
“Not so sure about that,” I laughed nervously, blinking sawdust out of my eye and trying hard to hold onto the scalding chainsaw.
“Nah. I’m glad you’re doing it, David. Might let in more of that morning light.”
“Man, sure hope so,” I told him. “I realize I’m probably breaking some adage.”
“How’s that?”
“You know, good fences, good neighbors.”
Hans chuckled but said nothing.
“Well, we think you guys are great neighbors,” he finally offered. “The old ones didn’t take as kindly to our backyard farming.” He stepped down from the stump he’d been standing on. Then out of view, he said, “The only thing I might have done, though, is not cut the fence quite so low beside our chicken coop here. I bet you’re going to start seeing some of birds in you yard.”

I looked back at the area he was referring to, the part I had just finished, the part I had cut pretty much flush with the tin roof of his coop.
“Ah fuck,” I said, wishing he had told me fifteen minutes earlier. “Didn’t really think of that.”

He laughed, but he didn’t seem to really mind. And so I finished the job as best I was able. Then I threw away the burning hot bent blade, coiled the extension chords and hosed myself off. The boys loved how the fence looked when they saw it, and together we stacked an SUV-sized pile of cut wood to one day toss into an epic bonfire. Last evening, the sunset was incredible back there. And this morning I looked out expecting to see a bunch of chickens strutting around but found none.

So far so good. That said, I’m not proposing cutting down anymore of the fence anytime soon. I’ve vowed not to pattern my fence cutting on the way I cut my boys’ hair, which steadily gets shorter and shorter as I try to level it out….That said, I must admit that I am itching to replace that blade and trim just a little bit more here and there…Still I still see the value in a good fence. But let’s hope a little more light and free ranging chickens make for good neighbors as well.
Chin up,
David