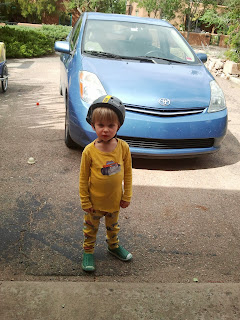 When someone asks if “that is your blue Prius parked outside?” it’s rarely good news. You know, if you hear them calling a license plate number out over a loudspeaker in a store or an airport or a dentist office, it’s not like the Pick 6. You don’t want the number to be yours. You’re not about to win a new grill or get a compliment on how symmetrically the car is parked. At the very least, your lights are on. Or your alarm is going off. And even then, you’re probably in a dressing room wearing just your skivvies and sweat socks. Or maybe your with two screaming kids and your number is about to be called at the Post Office or the deli. Or you’ve finally gotten a Home Depot worker to acknowledge your presence and start explaining the pros and cons of various power drills. But it’s not always that something innocuous. Maybe you parked in front of a hydrant. Maybe you were just ticketed or towed. Maybe some visigoths just made off with your hubcaps and stereo.

The point is there are lots of possibilities. Nearly all are bad. “Is that your child?” is a similar situation. Rarely are you about to hear how kind and calm he’s been or how intelligent she is. Probably another kid is bleeding, and your offspring is to blame. Maybe someone just peed on the rug and your boy’s pants are soaking. It’s likely all the books on the low shelf in the library are now on the floor. That sort of thing.

So it was today. Both kids off of school. I’m lugging them into Noah’s preschool for the parent teacher meeting. The meeting was going well. Noah is all sweetness they said. He shares, they said. He picks up after himself, they said. And then the door opens.
“David, is that your blue Prius?”
“Ah, fuck me.”
Well, that wasn’t exactly my response, but that’s what I was thinking.
“Your front right tire is completely flat.”
“Really?”
That was what I said. As if the principle of a church pre-school was in the business of that sort of practical joking.
“Really,” she said.

So I ended the meeting with Noah’s teachers thinking that at least I now knew what that horrendous noise was I was hearing over the Lou Reed we were blasting when I had backed into the parking spot. And then a few minutes later, I’m out on the side of a relatively busy road (by Santa Fe standards) with both my boys (who were way underdressed given the wintry weather), chest against the pavement trying to figure out where to position my jack.

I wasn’t thrilled about the situation. For one, all of the other parents are streaming in for their parent-teacher meetings. The guys are giving me a thumbs up. The mothers are asking if I need help. Neither felt good. For two, Noah (who has just been universally praised) has taken to poking me in the butt whenever I’m bending down or in anyway engaged and not guarding my backside. For three, Jackson keeps asking me, “ugh can we just go already?” For four, I’m not entirely, shall we say “sure” of how to change a tire. 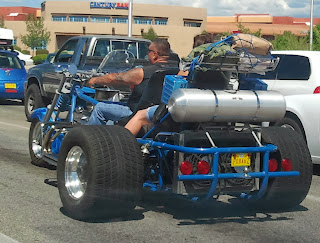 Luckily I wasn’t changing one of these tires.

But here’s the thing: maybe it’s that I now own an axe, or maybe it was some strange competitive surge I got wondering if I could change a tire faster than a parent-teacher meeting, or maybe I was aware that this was one of those moments my kids potentially would never have let me live down (you know, the car sliding off the jack and somehow trapping me under its hybrid heft)…well, whatever the reason, I changed that tire like Jim McGee (Mario Andretti’s longtime pit crew chief, for the few of you who didn’t already know). I jacked the car up smooth. I loosened the lugs two at a time. I pulled off the tire and rolled it to the back of the car. I picked up the spare and bounced it on the ground a time or two before tossing it onto the bolts like it was a pizza dough. And then we revved the silent engine and sped off, getting up to about 35mph in around 20 seconds.

So, despite tarnishing my reputation as not being very, shall we say “handy,” particularly around automotive matters, I felt pretty great this morning. In fact, I’ve never felt so good having a flat tire or having it be my car that was called out. I suppose I take back all the above. Next time I hear “is that your blue Prius?” I’m going to say with cockiness, “you’re damn right it is.”

(Oh, and since my primary job is making and playing music, I should add that I’ll be in the northeast next week for a string of shows. Full details on the tour is listed here, but I’ll be in Philly Friday the 1st, DC Sunday the 3rd, Portland Tues the 5th, Brattleboro Thurs the 7th, Boston Fri the 8th, NYC Sat the 9th and South Orange Sun the 10th, with private shows filling in all those dates in between. NY is going to be a special show, as I’ll be playing for the first time with an unbelievable drummer/percussionist.)