A warning to you, kind reader: this blog entry has nothing to do with fatherhood, music, skies or anything else that other posts have considered. If those are the only topics you care to read me ramble on about, read no further. But if you’ve long wondered about my opinions on the controversial relationship between salt and pepper, then this one’s for you.

The elephants pictured above are our salt and pepper shakers. Cute. Yeah. Well, a couple nights ago Jackson tried to hook their trunks and one cracked. Here’s what it looks like now. Not as cute. 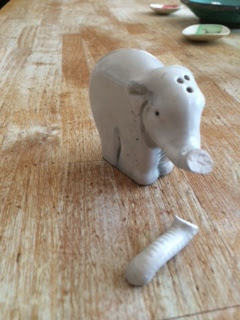 “Well, I hope it was the pepper,” I said to him. “Because salt is way more important. Know what I mean?”
“Yeah, I guess,” he said, walking out of the room. “Never really thought about it.”
“Nobody thinks about it. That’s the problem.”
Jackson turned to look at me, trying to gauge if I was being serious. Then he went off to his mess of legos. I, on the other hand, sat and stared at those two elephants, one holding salt and the other pepper and got all worked up.

See ever since I read Salt by Mark Kurlansky, I’ve been troubled by something. My trouble is this: most people consider salt and pepper to be equally important. When we use one, we use the other. We ask for both to be passed. We buy the shakers in pairs, and we set them side by side on our table. But they’re not equal. Not at all. One is vital. The other is dispensable. And I say, enough is enough. Who’s with me? So far, no one. In fact, no one who I’ve brought it up to (namely Sarah and my guitarist Bill) seems equally troubled. So in desperation, I’m turning to the internet in the same vein that so many turn to the internet, to find some like minds out there. Maybe host a meetup or something.

Kurlansky does a pretty epic job of explaining the uses and importance of salt throughout history. It has something like 14,000 uses. Wars have been fought over salt. Men have been paid in salt. Sal is the root of the word “salary,” in fact. “Soldier” comes from it, too–in Latin “sal dare” (to give salt), for some early fighters were also paid in salt. So many of our paths were first trodden by animals looking for salt. The city of Buffalo is named that because the wild buffalo came to the get their fix from the nearby salt lick. Animals would die without salt. We’d die without it. It’s magical. It’s romantic. Bridal couples in the Pyrenees went to the altar with pockets full of salt to ward off impotence. The Romans used to call a man in love “salax” or “in a salted state.” It’s the root of the word “salacious.” And, of course, it makes food taste good. If you need more convincing, check out the book or just try to cut salt out of your life for a while. Good luck.

Now turn briefly to the shaker beside the salt. The one full of pepper. I don’t want to argue that pepper is entirely irrelevant. I like to pepper my eggs as much as the next man. But I do think pepper has a lot more in common with spices like, say, dried thyme, oregano or basil than salt. Sure, most common black pepper is less dominant than those herbs. It adds a bit of spice and bitterness without drawing too much attention to itself, without altering the main flavors. But does it draw out flavors like salt? I don’t think so. If you forget to put pepper in bread dough, is the loaf ruined? No, in fact, most bread recipes don’t even call for pepper. Could you could go without pepper for a day? a week? a month? Of course you could. In fact, if a doctor told you that as of right now you are off pepper for good, would you be devastated? I doubt it. I’d say that of all the items I regularly eat, pepper might be the easiest to eliminate. If there was a global pepper shortage, would nations go to war? Not a chance. People would just say, “well it had an impressive run,” and then they’d get on with it. Is pepper vital to anything? I don’t think so, no. Would you accept pepper in payment for a day’s work laying bricks? Absolutely not. Is there anything romantic about pepper? Not that I can think of–except maybe for the members of this forum. I’m sure many of you put it on a lot of foods. Most recipes suggest you salt and pepper your meat first. But is this really all that important or merely convention? The salt part is vital. But the pepper? Maybe it makes the average cook among us feel a little more like a chef when he pulls out the mill? But does it really change the chemistry of the cuisine?

Listen, I put it on a lot of food, for sure. And I like it. I’m not here to bash pepper. In fact, if it were just another spice on the rack, I’d have nothing ill to say about it, might even be writing to exalt it over its herby neighbors. But it isn’t just another spice. It doesn’t sit beside marjoram. It sits beside salt, the king of all minerals. Somehow, pepper came down off that rack or out of the cupboard and took an exalted place at all our tables. I just don’t believe it earned the promotion. There are two thrones for seasonings. Salt holds one. Pepper sits in the other. And in most cases, the thrones are exactly the same size. Blasphemy! Pepper shouldn’t even be in the throne room! It makes me wonder if there wasn’t some point when some well-funded pepper lobby mounted a huge campaign. Maybe the Koch brothers were behind it. I bet they were.

I’m not sure I can imagine a more mismatched pair. Maybe these guys: 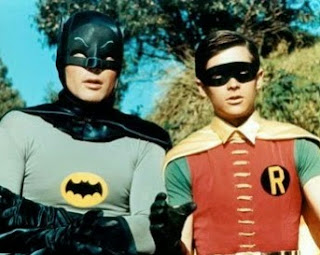 Are you with me? Let me hear from you if so. Because it’s a lonely crusade over here. I got to go play a gig or I’d write more, a lot more. But try your hand, tell me a more mismatched marriage? Holmes and Watson? Fezzik and Vizzini? Maybe. Still, I put salt and pepper atop the list.