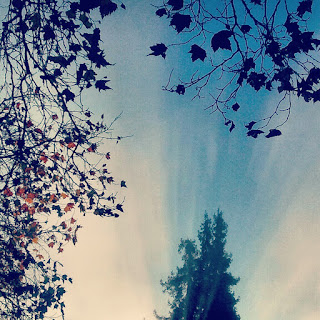 Went back to Berkeley for Thanksgiving (evidenced by sky 60, pictured above, which was a moment where the sun broke through the fog, and pictures 58, 59 and 61 in the instagram series). My mom (yes, “my mom,” not just “mom”–if I haven’t mentioned it before, that’s one of my pet peeves. For brief reference to another pet peeve of mine, see this earlier blog post) brined a brilliant bird–brilliantly flavored, that is. Can’t really speak to that particular turkey’s intelligence, though I think I wasn’t the only one who noted it’s dignified air before being shoved into the oven.

The kids were definitely excited to be back, and we saw some good old friends and breathed in that thick Pacific fog (which Jackson referred to as “the breath of Poseidon” — #howtoraisenerdyyetpoetickids). Man oh man, the moisture back there felt good. If you’ve never lived in the desert, you might not be aware of the degree of dryness we have adjusted to. Allow 2 examples to illustrate:
1) We have a clothes line. It takes me a while for me to hang all our clothes, what with the cheap clothespins and my lack of dexterity and all. So that may have something to do with what I’m about to say, but it isn’t the biggest factor. I hang the clothes on the line. And immediately upon hanging the last article, I go back to the other end of the line and start removing the now perfectly dry clothes. That was example number 1.
2) If you don’t eat or use a piece of fruit, let’s say a lime for visualization purposes, within, oh, maybe 2 days, what you will find in the bowl is not that verdant and juicy and somewhat spongy piece of citrus you purchased but rather a dark olive pit, more like a squash ball, if squash balls were made of rock. The Bay Area looked and felt to us like the Costa Rican rainforest. I don’t recall whether or not I properly appreciated it while living there. But man, if a crack forms in the sidewalk, a jade plant, some jasmine and a calla lilly will spring up before, say, one of the many tweed-clad baristas have time to hand-drip you a coffee.

Noah was pretty disoriented at first. He has lived the vast majority of his days in Berkeley, after all, so being back felt more like returning home than visiting. And I have some strong suspicions that my mom was whispering subliminal messages to him while pushing his stroller. For example: “just tell them you want to move back,” or “you know you don’t even have to leave with them.” That sort of thing. Eventually, though, he was in heaven. As was Jackson, who never ceases to amaze me with his confident fluidity as he navigates new and old relationships and landscapes.

As a perk to the visit, I got to play a short set at the good old Freight and Salvage on Sunday, opening up for a real national treasure, Ramblin’ Jack Elliott. I challenge you to find a more charming, charismatic, sharp and funny 80-year old. Man oh man was he a conversationalist. I mention Boston. He says, “Boston, Boston…I think I was a stowaway on a ship out of Boston once.” I say something about Santa Fe. He tells me he rode a bull in Santa Fe. Apparently Kerouac read him “On The Road” while trying unsuccessfully to get it published. Apparently he knew Woody Guthrie. Apparently Bob Dylan was his “swamper” on a few drives. (Turns out swamper is what we now call, and I will never call again, the guy riding shotgun.) He told me these tales not in a boastful way, rather with a glimmer in his eye and a big full heart. Here is a man who has lived his life with vigor and passion every single day. It was inspiring, and I almost passed on my set so I could just talk to him. Instead I played only 5 songs and yielded the stage so I could hear him talk and sing. Turned out he did more talking than singing, but that was just fine by me, for there was a bit of the breath of Poseidon in him, and it filled the room.

We are back in Santa Fe, as the skies that are about to follow for the next 25 days or so will reveal. We arrived to that miraculous aroma of pinon wood and an abundance of stars. Though Noah now says “which home?” when I say we are going home from school or the park, we are all, I believe, happy to be back.