I now own an axe. As of yesterday. Yep. And I’m not talking about an electric guitar like the one Kerry King (Slayer) uses. I’m talking about an actual axe, i.e. blade and shaft, i.e. this baby. Sarah gave it to me for my birthday. It’s an awesome gift, one I was certainly not expecting. I can’t imagine any of you were expecting it either. Were you? It came with a manual. It’s a bit amusing to have a manual for an axe, I’ll admit. However if you’ve read my book, you know I need any advice I can get in this department. The first page in the manual has a picture of my axe. Under the picture reads the following words: “The oldest tool known to humankind.” I’m not sure how they know that. But I like it. I’m not arguing. Because I now own one, too.

To prepare me for my new tool, Sarah showed me the Wernon Herzog film “Happy People.” Seen it? Here’s the trailer. The main character uses his axe like another hand. The guy probably shaves with it. I’ve got a long way to go before I come close to looking natural with it, before I start chopping vegetables with it, before I strap it to my back when I ride to pick up the kids, but I did swing it a few times this morning (more like a tennis racket maybe than a cutting tool, but still), and I felt pretty good and rugged doing it.

On page two of the manual, it reads: “In our quest for the best made axe we encountered things that captured our imagination that needed to be shared. We also happened upon other people who shared our vision and dedication for quality, adventure and making things. We’re glad you’re one of those people.” This has the vague ring of some promo for manhood and manliness groups that I find fairly ridiculous. However, I must admit I like a gift that also, in a sense, initiates you into some sort of society. (Somewhat similarly, I like a Halloween costume that requires the wearer to act a little, put on an accent, maybe.) And as long as this society involves guys like the protagonist in said Herzog film or maybe my neighbor Dirk who keeps goats and roosters, has a water catching system that’s more effective than the city of Santa Fe’s and seems to more or less live off the grid, I’m fine with it. What I don’t want is to be part of a group like this one. (Do yourself a favor and watch a bit of this video. It’s not a joke.)

Sarah also gave me all the goods I need to start canning–mason jars, a big pot with a rack to keep the jars off the bottom, a book of recipes for pickling and preserving, etc. Between all that gear and my axe, I feel fairly okay about the coming of winter.

Well, at least I did feel pretty good about it all until we went to the Renaissance Festival yesterday afternoon and there was a guy turning a buffalo hide into a shield. At that point I realized I still had a long way to go.

By the way, we did take our kids to this Festival (or faire, as I think they want it to be called/spelled). Don’t want you to get the impression that Sarah and I got a sitter for the boys, got in costume and went ourselves. Did you get that impression? There were plenty of couples there alone, and I do imagine some of them had kids they left at home. But that’s not our bag. I mean, I like bustiers and chain mail as much as the next guy but a) that’s not really my fetish and b) even if it were, I don’t know be as psyched as some of these folks to flaunt it.

By the way, here are how our kids were dressed:

And yes, for those amateur historians out there wagging a finger at little Noah, skeletons were around during the Renaissance period, too.

At any rate, Jackson kept asking us why Sarah and I weren’t in costume. After seeing a startlingly large-breasted lady dressed as some cross between Maid Marion and the Wife of Bath, he turned to Sarah and said, “see mommy, you should have dressed like her.” And then he said “maybe next year, daddy?” when a guy came by looking like the gimp from Pulp Fiction.

And that’s the thing, as I was walking around, I started thinking again about my axe, which by the way came with a leather sheath that does make the whole think look a bit gimp-like: 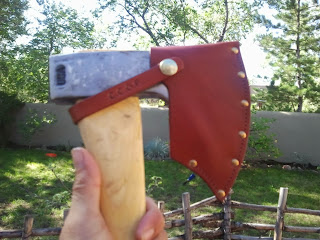 and I started to realize that an axe can say a lot of different things about a man, and so I have to be careful, have to work to control my image, my reputation. I suppose that’s what happens when your dealing with the oldest tool known to humankind. Everybody from Abraham (Isaac’s dad) to this guy below probably had/has one. 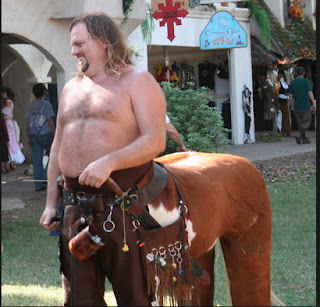 Like anything, an axe can be used for good and bad. Providing firewood: good. Joining and then carrying it to meetings of this group: bad. But that’s a responsibility I think I can handle. And it’s well worth it given how good the baby feels in the palm and how good having it in the palm feels in the heart.